Lessons from The Dolphins: The Wonder of Going Deep 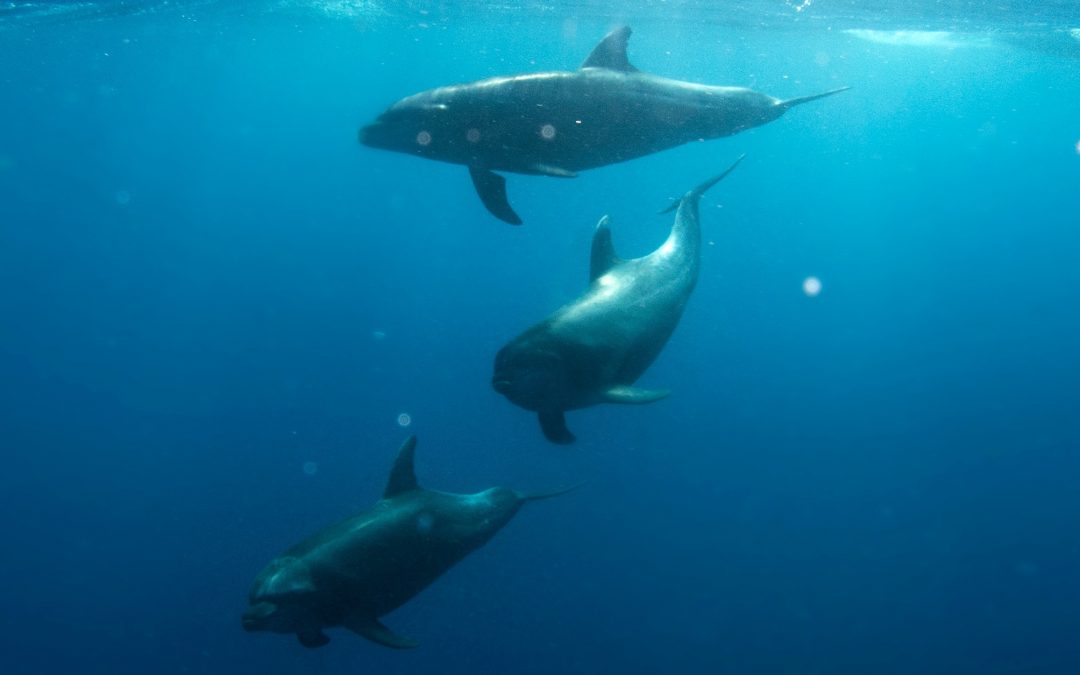 Swimming with wild dolphins in the Caribbean taught me that looking below the surface reveals an entirely new world. I realized that most of my life had been spent safely in the shallows of my beliefs and my relationships. I’d like to share the story about how I discovered that when I took the leap and dived under those surface waves, I connected with a new truth that blew my mind and heart wide open. 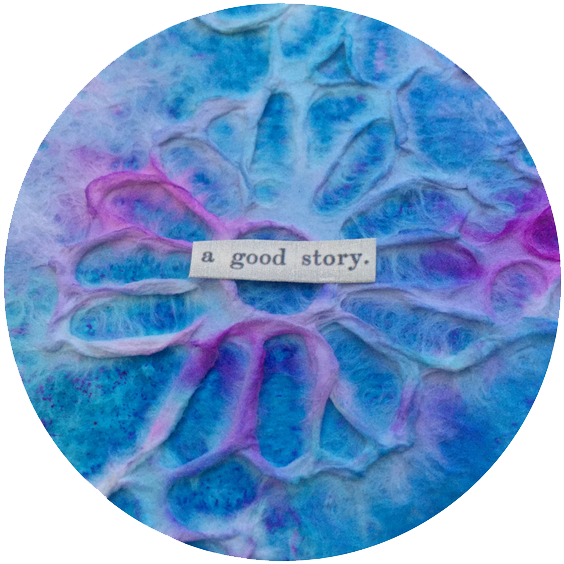 This deeper, underwater truth revealed itself to me after my husband and I spent over three hours one afternoon swimming with three pods of wild dolphins. Tim and I, and our guide Doug, had been driving around in the ocean for a few hours in his small, 17-foot boat. In the far distance, I saw many tiny black triangles on the surface of the water. At my urging we drove over and all of a sudden we were in the midst of dozens of black fins and dark, cresting backs. Doug, said excitedly, “Man, have we found some dolphins! Hurry, get in the water so they’ll stay with us.” Without hesitation, Tim and I scrambled to get our fins and snorkel gear on and within a minute or two we both jumped in the water. Yes, these were big, wild animals (much bigger in person than in photos), and yes, there were a lot of them. But my normal mode of, “lets think this through and make sure it’s safe” seemed to be completely off line. What flashed through my consciousness was that if I had the chance to be up close and personal with a bunch of bottlenose dolphins, I was not going to miss out. And the fact that it would be just my husband and I in the water made it even sweeter.

I jumped in the ocean and immediately a 6-foot dolphin swam right up and looked me in the eyes. My first reaction was Holy Cow! My second reaction was, it’s weird how natural this feels. The level of intelligence in those eyes was startling and profound. Dolphins don’t seem to have much of a concept of invading one’s personal space, ours or their fellow-finned ones. But they didn’t crowd me or bump me or do anything that felt uncomfortable. Sweetly they liked to swim next to me, eye to eye. I’d swim parallel to the surface with my mask under the water and my snorkel above so I could easily breathe. A dolphin would be there, swimming right next to me…. looking at me in the eye for 30 seconds… or a couple of minutes … or an eternity (time seemed all undefined and untethered when we were with the dolphins). They also liked to swim down to the bottom, 30 feet or so in the warm, aqua blue clear water, to look for fish or play around with each other, and then swim directly up to us for a long gaze before gently swishing by. 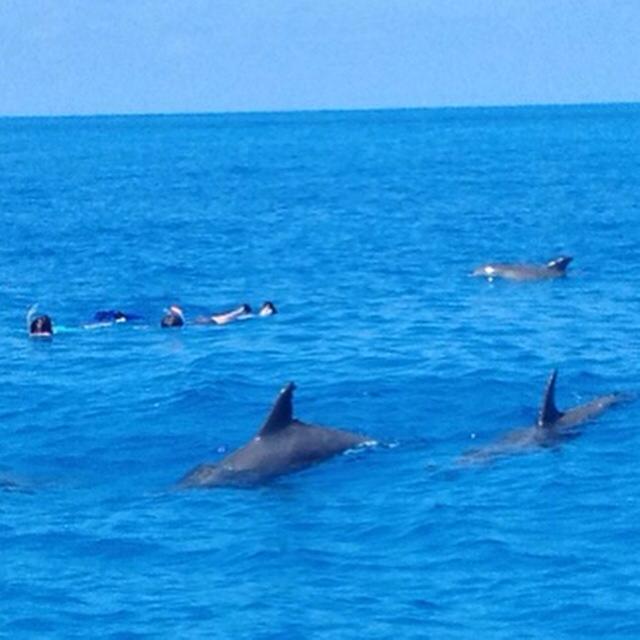 My husband and I with three of the 20 or so wild dolphins around and below us in that moment.

Returning to the reason I’m sharing this story — my insight about what’s on the surface and what’s down below — I can tell you without question that it is a whole other world when you stick your mask in the water and look down at a big group of dolphins. From the surface you only see the dorsal fin and a small part of the back of the few who are coming up to breathe. Under the water there are dolphins everywhere! Two or three at a time were playing in a tight dolphin-ball formation, seven or so more were sticking their snouts in the sand and twirling to dislodge a fish snack. They were swimming in pairs through the water just chillin’, and once a group of four were playing keep away or catch with a live sea snake. When one of these graceful beings goes down to the bottom and then starts swimming up to the surface, gaining speed rapidly till they shoot out of the water for a dramatic jump… it is pure joy. When you are under the water and get to see the dive, the ascent and then the jump, you get all the delicious anticipation time, not just the surprise flash of seeing a dolphin in flight, shooting out of the waves, for mere moments.

Life can be like that too. When you are watching from the surface all you notice are the dramatic changes happening in a flash. But when you take a deep breath, sink deeper and look at what is under the surface of your emotions or other people’s actions, you notice an entirely new world that was invisible to you just moments before. It’s magical.

When we were watching the dolphins under the surface time got all wonky. One set of moments would feel expansive and limitless, especially if one of the dolphins was directly interacting with us, and in the next few minutes so much was happening so fast it was quite overwhelming.

And the sounds under the surface, well that was otherworldly. I’ve heard recordings of dolphins, but feeling the vibrations of a pod whistling to each other, pinging their sonar to find fish, clicking loudly at each other…. and sending waves of those strong, loud sounds right at you, is unlike anything I’ve experienced before. It’s a beautiful, intense and pressure-filled, super-tingly surround-sound experience. 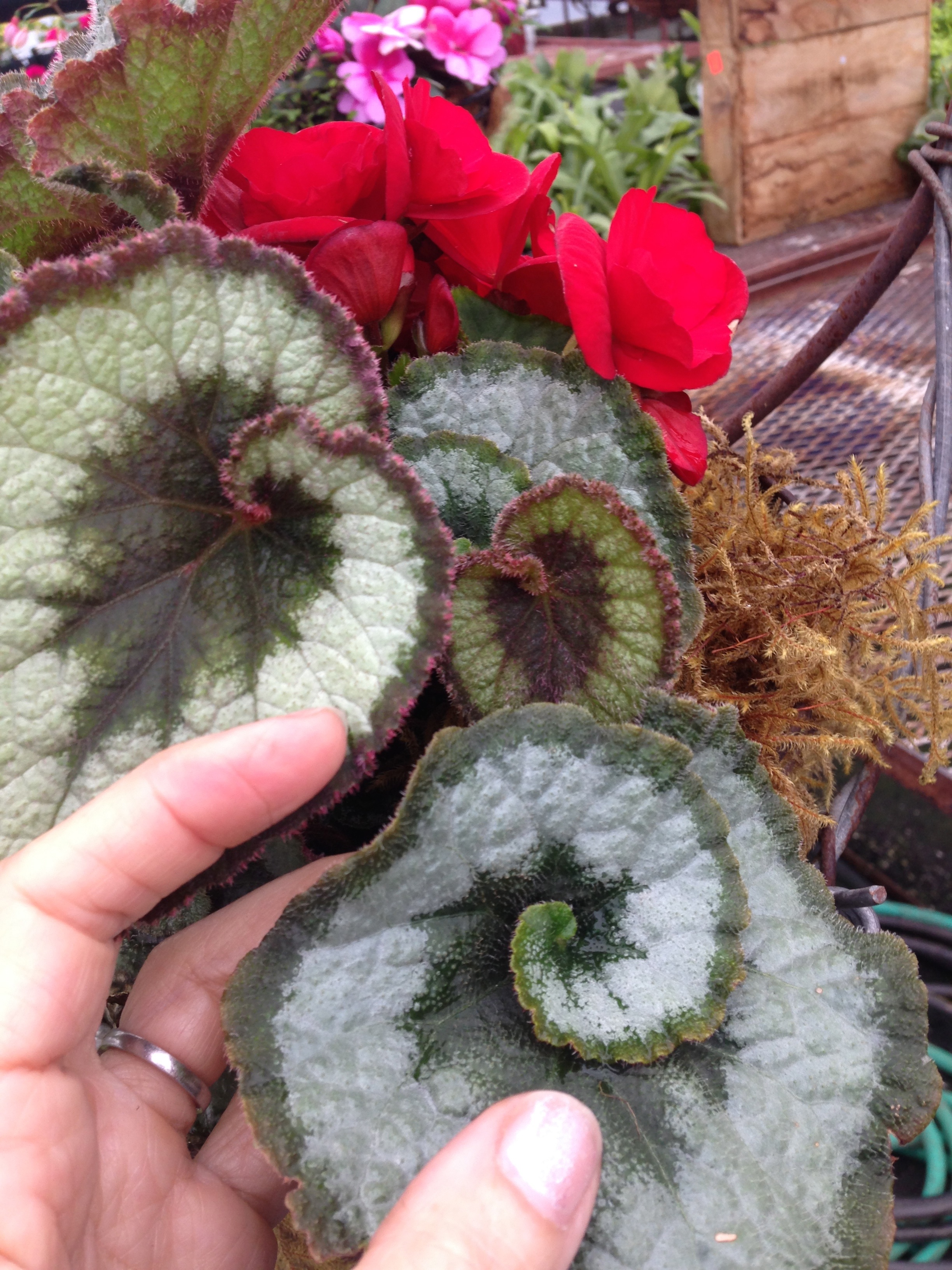 Ocean creatures react much differently to people entering their space than do forest animals like deer, coyotes, or squirrels. When you’re in the forest all the animals are on high alert. If you’re lucky you get to observe them from a distance before they run or fly to safety. In the ocean you’re just one of the beings swimming around. If you’re chill and respectful you are welcomed, and sometimes you luck into a close-enough-to-touch encounter. My surface world of casual and business relationships are more like the Forest. There tends to be lots of small talk (not my favorite), and most-everyone is being careful, watching what they say and not making any sudden moves if they want to get closer.

What is under the surface of a deep friendship or connection, what is swimming around in the dreamtime… that is a vastly different world. Those experiences will let you swim right and up and take a long look. When you peer into the depths of someone you’ve loved for a while (assuming you’re both in clear, warm waters) you can see their glimmering, messily beautiful, True Selves.

The dolphins showed me that, beyond question, I was ready to spend, much, much more time exploring the depths of my relationships.

The realization that what I saw on the surface of my life was such a small part of the picture, and what’s available to experience down below is so vast and rich, keeps unfolding for me. It was more than a little overwhelming to go through that kind of shift. But once I discovered what was under the surface of my life I couldn’t go back to just naively gliding along with all the people who believe that the ocean of our lives are just filled with empty water and a flat sandy bottom. There are dolphins everywhere down there! Oh and sharks… there were lots and lots of sharks where we were swimming. Tim counted 27 Nurse Sharks, and at one point a Lemon Shark. Nurse Sharks are mostly docile and like to stay on the very bottom feeding on small fish. But mostly, is not always, and they are 6 – 10 feet long. At one point when I was twirling to engage one of the young dolphins, I caught the attention of one of the biggest sharks. He came up from the bottom to check me out. Tim noticed and swam between us, and thankfully Mr. Curious turned and slowly drifted back down. I was so caught up playing with my pair of teenagers I didn’t even know what had happened till we were back in the boat. More blessings!

On the surface of the ocean it’s blue and green waves and shadows and the occasion glimpse of ocean life. And under the surface it’s dolphins, sharks, sea snakes, fish, coral, ocean grasses and on and on. On the surface of our every day life it’s getting the kids up and out to school, feeding the dogs, going to work, shopping for and cooking dinner, having a glass of wine with your husband and friends and talking about who said or did what.

Under the surface your soul is calling you to expand into your giftedness and swim out of your comfort zone. Your companions are longing to be deeply seen and heard, to be known. The trees are talking to you and Mother Earth is using the birdsong to let you know that she is deeply in love with you. She is calling for you to love her back with the same boundless, not a care for your safety, abandon.

Sure, it takes time to develop your lung capacity so you can stay under the surface longer. And our fragile human bodies and minds need time to expand; the energetic growing pains I experienced after being with the Dolphins were no joke. It can be uncomfortable to swim that far beyond your known comfort-zone.

But halleleuiah, it is so incredibly joyful and beautiful under the surface. The communion possibilities and feeling of connection is off the chart. So hurry, jump in, right now, before your emerging future swims off to find another playmate because you hesitated too long. 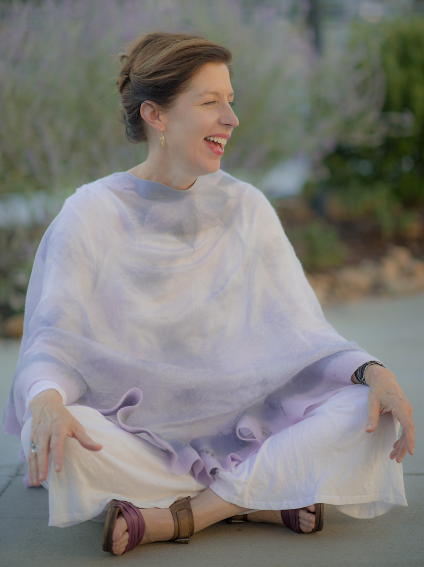